Having partnered with Speedway Australia in support of their fantasy speedway initiative, Australian Wingless Sprint Racing is excited to launch their fantasy Australian Championship competition, which will be sponsored by Total Tools.

Being free to enter, the fantasy competition is a great way for fans and competitors alike to get involved in the upcoming Australian Championship at Warrnambool’s Premier Speedway, giving them an added stake in the outcome as they watch their nominated team battle it out on track, with the hope of gaining enough points to earn top honours.

With a budget of $30,000, participants may select up to a maximum of five drivers who will make up their team for the duration of the Australian Championship event.

Based on their current form and past results, these drivers have been divided into five different price brackets, beginning with the most affordable drivers at $2,000 and going up by $2,000 increments to the most expensive drivers at $10,000, and while participants may select their five drivers from as many or as little price brackets they wish, they may not exceed their $30,000 budget.

These drivers will then earn team owners points throughout the Australian Championship weekend based on their results, which will be tallied at the completion of the event, with the highest point scorer being announced the Australian Fantasy Champion.

“The fantasy competition is a fantastic concept and it’s a new and exciting way to get people involved in the Australian Championship,” commented Totally Speedway’s Daniel Powell, who is also the AWSR’s media manager.

“As well as being a bit of fun for the drivers and their teams, it also gives fans another reason to tune in for the Australian Championship event and keep abreast of everything that happens throughout the weekend, which is great for the Wingless Sprints class as a whole.”

Following practice on Thursday, February 21, the 2018-19 season running of the Australian Championship will be fought out on the Friday and Saturday nights of February 22 and 23.

AWSR would like to thank Total Tools for their support of the Australian Championship fantasy competition. Standing by their motto – every tool, every trade – Total Tools is the country’s leading supplier of a wide range of world-renowned tool brands. To find out more about Total Tools, visit their website at www.totaltools.com.au, or LIKE them on Facebook and FOLLOW them on Instagram by searching Total Tools.

Chadwick Makes It 4 In A RowNews 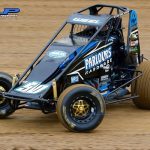