The two nights over the Easter Long Weekend for the Wingless Sprints in the state of Victoria saw the annual Gary Bowden Memorial Cup fought out, and it resulted in the wins going the way of Chris Halesworth and Travis Millar.

On Good Friday night at Rosedale Speedway, Halesworth made the three-hour journey from Geelong worthwhile by coming away with an impressive feature-race win ahead of Daryl Logue and Todd Hobson in second and third place respectively.

After starting from the outside of the front row for the feature race, Halesworth hit the lead from the opening turn and was never headed for the remainder of the 25-lap distance.

Behind the podium finishers in fourth was Aron Lawrence ahead of Brad Foster, Christopher Temby, Ladies of the Dirt round two winner from earlier in the night Bree Hall, veteran Viv Rockliff, Jamie Mills and 10th placegetter Daniel Mayson.

Earlier in the night, the heat-race wins were shared between Halesworth, Steven Loader, Lawrence, Temby, Logue, Hall and Kelvin Johnson.

The following night at the nearby Bairnsdale Speedway, Millar, who had missed Friday night’s action due to running the opening Sprintcar Easter Trail round at Geelong’s Avalon Raceway, put in a hard-charging drive and was rewarded with the best possible result.

Starting from the middle of the feature-race field, due to recording a DNF in one of his heat races, Millar quickly worked his way through the field and took over control of the lead by the middle stages of the 30-lap event. Once out in front, last season’s Victorian Champion was never headed.

Continuing what’s been an impressive debut season in the Wingless Sprint class, Jamie Mills greeted the chequered flag in second behind Millar, while the podium was rounded out by Steven Loader in third. In the heat-race action earlier in the night, Evans, Millar, Loader, Mills, Mick Lovell and McDonald all recorded wins.

The Gary Bowden Memorial Cup, held annually after his untimely passing in 2014, is a race that is held in very high regard. Bowden was instrumental in the success of Wingless Sprints, not only in the Gippsland area of Victoria but also state-wide. In addition to being president of the class in Victoria, he was also a racer and well-respected member of the local community. After Bowden passed away suddenly in 2014, the Gary Bowden Memorial Cup was first held in the 2014-15 season.

The next event for the Victorian Wingless Sprints will be this Saturday night’s third round of the Salt Electrical Ladies of the Dirt Series at Laang Speedway. 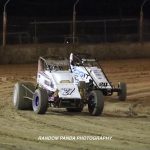 Queensland Title on The LineNews