In what was a dominant performance, Jason Andreatta came out on top in last Saturday night’s third round of the ML Automotive Nyora Nationals at Nyora Raceway in the southern Gippsland region of Victoria.

After starting the feature race from pole position alongside youngster Todd Hobson by virtue of winning two of his three heat races and finishing second in the other, Andreatta made every post a winner on his way to dominating the entire 30-lap journey. Despite being in control of the feature race for its entirety, Andreatta was kept honest all the way to the fall of the chequered flag by newcomer Matt Mills. The impressive ex AMCA Nationals pilot chased after Andreatta hard but he was unable to take control of the lead and had to settle for second by the slimmest of margins.

Hobson enjoyed his best result of what has been a challenging 2018-19 season so far to record a third-place finish on the podium ahead of Brad Foster and Steven Loader in fourth and fifth place respectively.

Due to a range of issues, there were numerous drivers who were unable to reach the finish in the feature race, and they included Travis Millar, Ebony Hobson, Bree Hall, Kelvin Johnson, Jake Warren, Sean Kuypers, Ricky Mills, Daryl Logue and Jamie Mills.

The next outing for the Victorian Wingless Sprints is set to be a club show this coming Sunday (March 17) at Drouin Speedway. 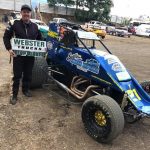 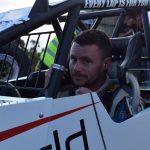