With a bolstered field of 25 drivers from throughout the host state and New South Wales gearing up to fight for state title honours, coming out on top wasn’t going to be an easy feat, but having already done so on two previous occasions during his career, Thomsen once again proved that he was up for the challenge. Piloting the Tas # 24 machine owned by Tasmanian Tim McKinnell, Thomsen lined up on the outside of the front row alongside pole-sitter and fellow Maryborough local Dan Moes for the Queensland Title-deciding feature race, and while it was Moes who raced into the early lead at the drop of the green flag, it didn’t take too long for Thomsen to make his move.

Successfully executing a passing move on lap six to take his place at the front of the field, Thomsen went unchallenged throughout the rest of the 30-lap duration, pulling away to create a decent gap and crossing the finish line over seven seconds clear of his fellow competitors to clinch the third Queensland Title win of his career.

It was a pleasing performance for Cody O’Connell, who started from the inside of the second row but was able to elevate himself into the runner-up spot during the final third of the race after pipping returning racer Moes, who was forced to settle for third place. This backed up last season’s runner-up result for O’Connell. Falling victim to the tricky track conditions, no less than 11 drivers had their Queensland Title hopes prematurely dashed, the first of which was Casey O’Connell (Cody’s younger brother), who failed to complete a single lap, as did Matthew Wright (NSW), Michael Butcher (NSW), Shane Thompson and Paul Robinson.

In the earlier heat races, Moes was the only driver to double up with a pair of wins, while the rest of the wins were shared between Cody O’Connell, Butcher, Eggins, Timothy Harris, Thomsen, O’Toole and Casey O’Connell.

The Queensland Title concluded the Wingless Sprint title events for the 2018-19 season. However the season in Queensland will continue this Saturday night for their final outing, which will be the final round of the Ian Boettcher Race Parts Super Series round at Brisbane’s Archerfield Speedway, incorporating the 50 Lapper.

Queensland Title on The LineNews 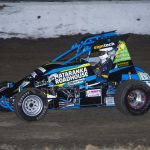