To say that the home-state challengers have the upper hand heading into this weekend’s Australian Wingless Sprint Championship would be quite the understatement, with a whopping 68 drivers representing Victoria when they take to the high banks of Warrnambool’s Premier Speedway.

With a Victorian driver coming away with the Australian Championship crown the last time the event was hosted by the state, interestingly at the same venue, the contingent will no doubt be hoping to repeat that feat some six seasons later.

Boasting such an abundance of talent amongst the field, there will be several drivers who will lead the group into battle, including former Victorian Champion Travis Millar, who has already added numerous feature-race notches to his belt so far this season and will be hoping to add his biggest yet aboard the Vic # 2 Fitzpatrick Autosports car. Off the back of recently being crowned Victorian Champion, Luke Storer is hoping to continue what has been a season of highlights, having also emerged victorious in the Summer Slam Series, while Dayn Bentvelzen will attempt to make amends after crossing the finish line in first place at the Victorian Title, only to be disqualified due to a post-race oversight.

One of Victoria’s shining lights, Luke Weel is sure to be difficult to beat, with the unlucky driver being just four laps away from a Victorian Title victory when disaster struck with a blown right-rear tyre, while regular front-runner and 2015 Australian Championship runner-up Andy Hibbert is also sure to be in the mix aboard the Vic # 88 car of Mat and Renae Eastham.

A consistent performance throughout the recent Victorian Title saw veteran Tony Moule rewarded with the runner-up spot, proving that he has what it takes to be in front-running contention during a title event, while Bhoe Paterson is currently on a wave of confidence after a career-best driver saw him complete the Victorian Title podium in third.

There will be a number of guest appearances by 410 Sprintcar drivers who will no doubt keep things interesting, with Tim Van Ginneken, Brayden Parr, Sam Wren and Brett Milburn bolstering the ranks. The latter of which will be hoping to repeat history after being awarded the 2013 Australian Championship silverware at Premier Speedway.

In addition to the Storer duo, multiple family combinations are going to be in attendance, with Hobson siblings, Todd and Ebony, being joined by Logue brothers, Wayne and Daryl, whose dad Peter Logue, a veteran of the class, will also be racing, and Mills brothers, Mathew and Jamie, who are newcomers to the class.

Luke’s older brother Daniel Storer will also be one to watch after coming home third in the 2017 Australian Championship at Carrick Speedway in Tasmania, as will Alex Ross, who will be driving the Vic # 14 car owned by Mick Uebergang, Carly Walsh, Chris Halesworth, Geoff Cook, who will be running his Lightning McQueen-inspired livery, Leigh Armistead, Brad Foster, Scott Irons and Michael Skene and a host of other contenders. 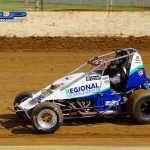