The Western Australian duo of Chad Pittard (pictured below) and Ash Hounsfield have served notice to their rivals heading into this weekend’s Australian Wingless Sprint Championship at Warrnambool’s Premier Speedway, with the Pittard Racing team drivers topping the time sheets in this afternoon’s practice sessions.

Having never competed at the south-western Victoria track, the Bunbury-based duo didn’t let that faze them and they went on to record the two fastest laps of the 27 practice sessions. Pittard emerged fastest with a best lap of 14.281 seconds, while Hounsfield’s fastest lap was good enough for second (14.288). Behind the surprise packets of Pittard and Hounsfield were the South Australian trio of Jarmin Dalitz, Brett Ireland and Kirby Hillyer.

The best of the Victorians was Sam Wren in sixth ahead of another South Australian in Anthony Tapley, and the top 10 was completed by veteran and current Vic # 2 Tony Moule (Vic), last season’s Victorian Champion Travis Millar (Vic) and current Tasmanian Champion Luke Redpath (Tas).

Current and two-time Australian Champion Joel Chadwick (SA) posted the 25th fastest lap from the four practice sessions that he took part in.

At tonight’s Calcutta for the Australian Championship that was held the nearby Deakin University in Warrnambool and was impressively attended by over 350 people. Over $8000 was raised during the auction, with Chadwick going for the highest amount of $800 followed by Millar and Weel going for $700 each.

The next 32 drivers in the point standings will qualify directly into two B mains, while other competitors will contest one of four non-qualifier events to determine qualifications into the D main and two C mains, with the top four in each main progressing through to the back of the next main. 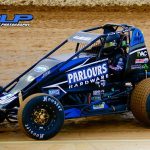